My blog has fallen quiet yet again as I have been filming new DVDs with Artists Network TV. I arrived in Fort Lauderdale, Florida just after New Years Eve and prepared to film here.
Last week I met the most incredible film crew at the filming location and we began the first shoots. Filming is such a terrific experience but I will confess at times it can be very exhausting. We worked straight through each day trying to beat the changeable weather that effected the lighting on set continually.

I tend to take each set of every film in one shoot, minus the need for any out takes. I love painting in a spontaneous manner so working with a crew as talented as this was pure bliss. They got every single pigment interaction on camera as needed in close up superbly. The tuition will be extremely easy to follow.

My only niggle is that I was interviewed outside on the first day. Why would this be a problem you may ask? In humid conditions mixed with drizzle my natural hair tends to do its own thing and oh boy it did! In the first film please, if you download it, look at my painting demonstration and not me! I must have looked alarming as the day passed because the film director raced me to a hairdresser as soon as the words "It's a wrap" on the first day were mentioned. To everyone's relief I walked in looking more like me on the second day.

Actually that wasn't the worst of my problems and I possibly shouldn't mention this but I was asked to have different outfits with me to change into for each film. No problem at all but when changing from one outfit to the other I had a slight hiccup with the microphone that was attached to my clothing. It went for a "swim" and as I was changing in the bathroom at the time I'll let you guess where! These outfit changes are quick, almost as fast as when I used to model years ago so clothes are thrown off and in seconds. While I felt really embarrassed explaining what had happened to the microphone to the director I was assured this has happened many times before. It may have done but not to me! I'm usually far more professional.

Anyway, at the end of last week three beautiful new DVDs had been filmed. "It's a wrap" are fabulous words to hear when you have been working intensively. I loved being told how easy I am to film with, a huge compliment but I love teaching and sharing my joy for working in watercolour.

I will share the news when these exciting new films are available. I can't wait to see them!

For now though I owe a huge thank you to Artists Network TV for inviting me back to create new films and to the exceptionally talented film crew who made each filming day a pleasure.

What an exciting life I lead! 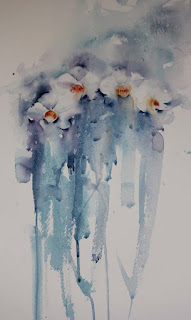 I will be teaching watercolour workshops over the next few weeks in the following locations. Whilst the workshops are fully booked I will also be giving demonstrations in Florida in Fort Lauderdale and Sarasota.

Full details, dates and workshop contacts are seen below:- 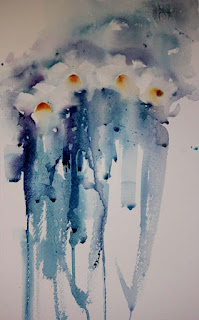 Magical Orchids in the Mist
Work in progress

It will be a year of flowers this year!  Why?  Because I am making it a year of flowers!
My new book "Atmospheric Flowers in Watercolour" will be launched in June 2018 and I am also on my way to film a new DVD about painting flowers, in different ways.  Bringing life and energy into our work. I'm deliberately avoiding subjects I have covered before in my book and DVDs so do keep an eye out for some really lovely demonstrations,with  new colour combinations and fabulous techniques to make painting even more enjoyable.

I am about to complete the above painting to start my new year. I have white orchids in my living room in our cottage and even though I am busy I just had to paint them today. They were screaming at me to do so.

I have several blues in the background o fmy first wash, there are lovely lost and found edges and I am about to add the detail. Not too much. Just enough to tell the story!

I am never happier than when I am painting. 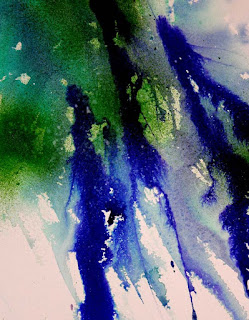 Wow, what a start to the year I am having. Tomorrow I leave to film my new DVDs in Florida with Artist Network TV.com. Everyone is so excited about my returning to film again with them and I am thrilled too. I can't wait to get there. Over the last few weeks I have had conference calls from the USA team to discuss my new demonstrations and film content. Its' been so exciting and yet with Christmas and New Year get togethers', trying to focus on this trip has been really difficult. Hence my silence on my blog for so long.

I used to contribute to my blog regularly but now any free time is so very hard to find . Just at the point in my art life when I have so many new ideas and far more to share. Its si frustrating in some ways as my technique and my painting approaches have changed dramatically over the years. Especially so with colour. Mainly because I travel so often and see so many tempting sights to paint . But also from my time spent at Daniel Smith in Seattle where I find myself  completely immersed in colour absorption from all the exciting shades there on display, readily available to try. By the way there are now just a few slots available for my workshops there at the end of this year when I will be returning.

For now I am still working on my new book which is huge! It is full of inspirational tips and demonstrations which I hope everyone will love. I am proof reading it at the moment and adding text for a few extra demonstrations in the last sections. This is a book I can't wait to get my hands on to be honest. It will be my favourite for years to come for many reasons. I will share more about its' launch  in other blog posts but I will be at Patchings this year to celebrate, if you would like to join me there.

For now though I want to wish everyone a very happy new year and I will make another wish. I hope whatever your goals or dreams are for 2018 they all come true.
But do remember.
Sometimes dreams need a little patience while waiting for them to happen, or they may just need a little nudge  in the right direction.

Lets' see what happens over the next twelve months but my tip would be try starting the year with some new colours! And of  course new colour combinations. Don't lets' get stuck in "yesterday" or what we have always done in the past. This is the year for excitement, dramatic paintings and stunning results.

Lets' all go for gold this year! 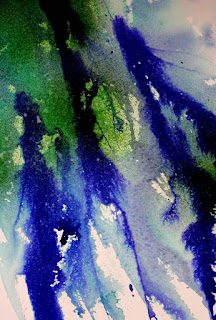 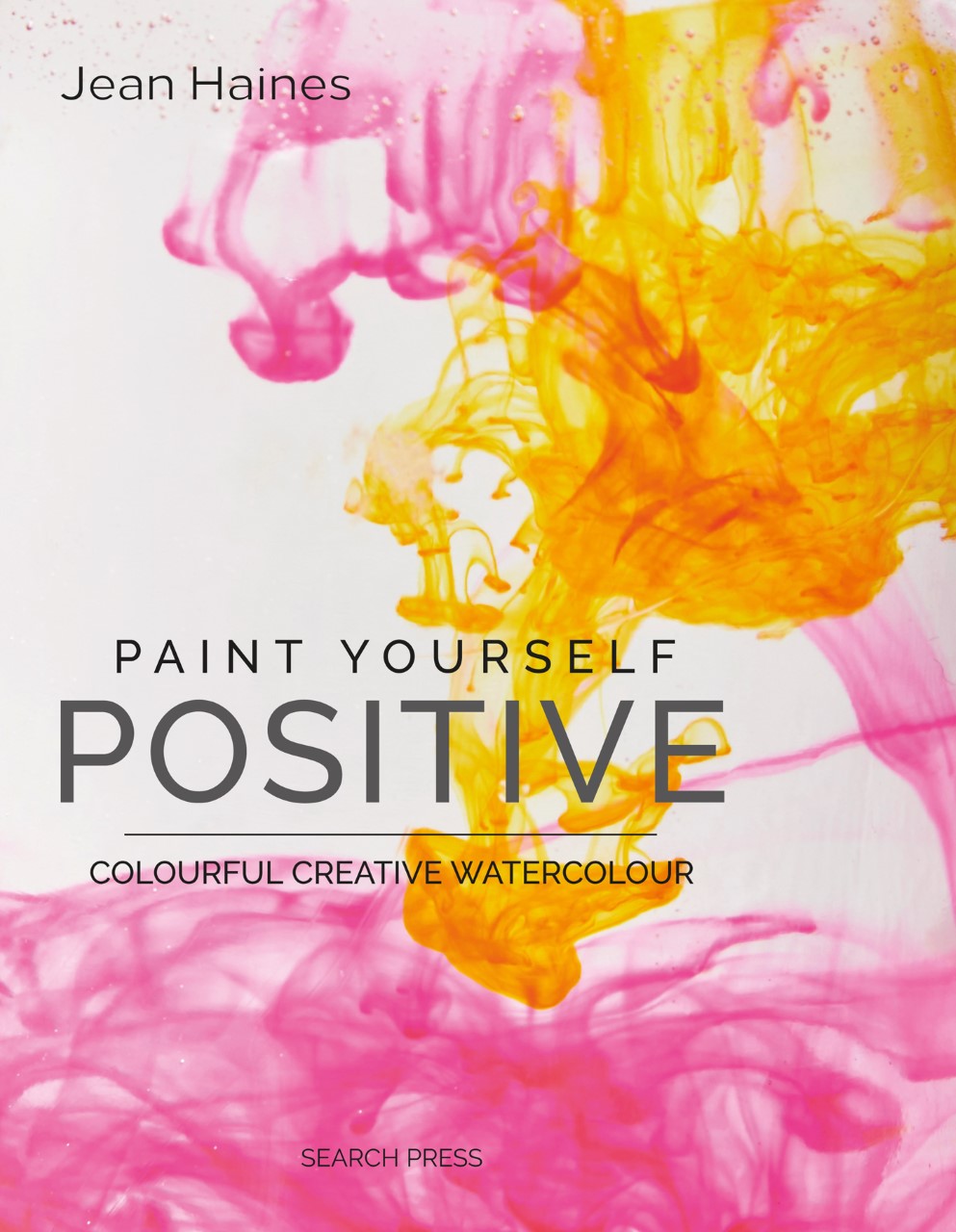 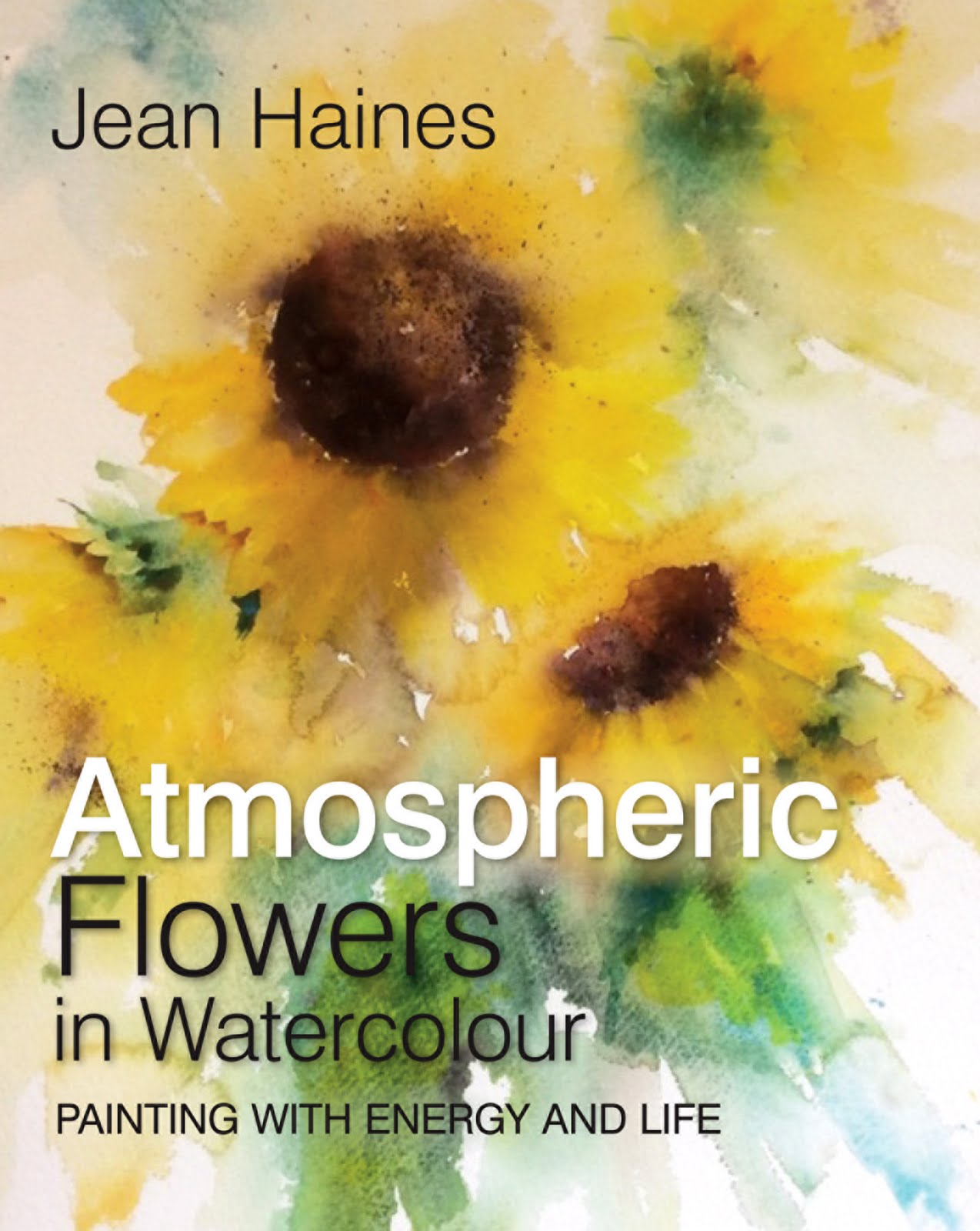 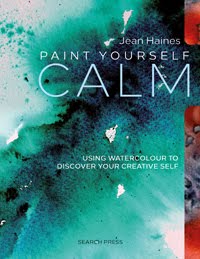 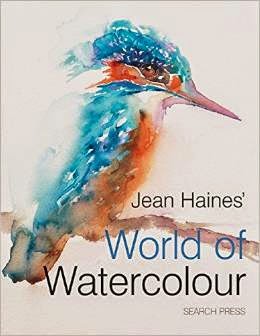 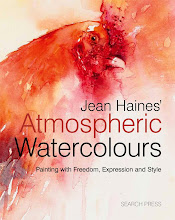 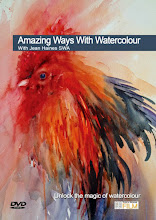 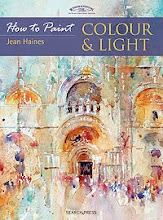 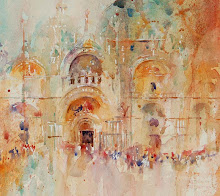 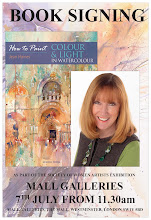 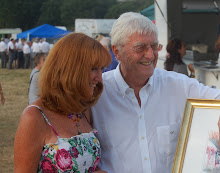 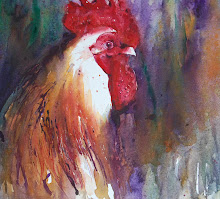 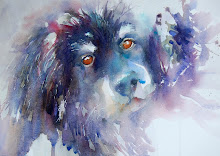